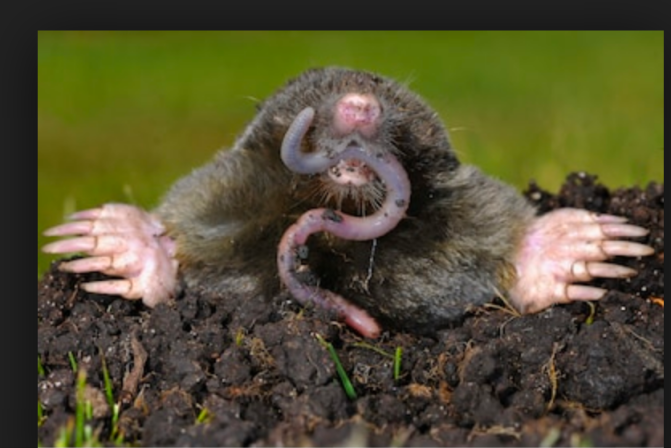 The Mole, June 8th, 2019
Oddly enough I had an encounter with a mole in our backyard and
my wife and I also watched the movie “The Mule” this evening. Oh,
what a difference a vowel makes.
Healdsburg has been overrun with moles this spring. Usually a mole
shows up in our yard for a week or two in April and early May to
ruin our yard. And then he leaves. But this year, perhaps due to the
wet mild spring; the moles won’t leave!
We keep stamping down their tunnel humps in the yard and garden.
I shovel up the dirt and rocks they leave on the sidewalk at the end
of their tunnels.
But today, I actually saw a mole working his way through the dirt in
our back yard! I’ve never seen that before. The mole had come up to
within inches of the surface. The mole was literally moving the
ground upwards as he ate his way along.
It was 2 PM on a very hot sunny June day. The mole’s tunnel was in
the hot sun, but he was insulated underground.
I considered getting out the pitchfork and killing the critter, but he
was right above our main water line input. This waterline had leaked
twice in the past few years costing us almost $2,000 to find the
leaks and fix them. The mole was in a safe zone.
So, I of course turned to Buddy our wonder cat and defender of our
property. He was sleeping on the ground in the shade. I picked up
Buddy and took him over to where the mole was three inches or so
under ground. Buddy wasn’t interested. He ran back into the cool
shade.
But my actions did cause the mole some pause. He no longer
continued his tunneling meanderings and disappeared, for now.
Tim McGraw