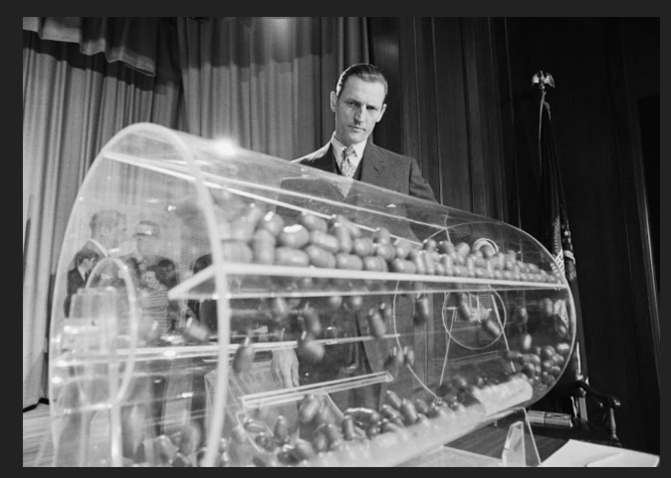 Americans, April 4th, 2020
Today in our little town in northern California, my wife and I went
to the store for groceries. Folks were all wearing masks and gloves
and practicing the social distancing of 6 feet, but if they had to
come near you they said, “Excuse me.”
A woman in full protective anti-germ gear was in front of us at the
cash register. She bought $305 worth of supplies. Which is a lot for
this little grocery store with narrow aisles just a few blocks from
our house.
My wife got a little too close to the woman as I put the groceries on
the belt. The paranoid Howard Hughes woman was taking a long
time to bag her groceries. Store staff is not longer allowed to help
bag the groceries.
The horrified HH woman recoiled from my wife as if my lovely well
dressed (she’s always dressed fashionably, well coiffed, and her
lipstick is impeccable) spouse was the Creature from the Black
Lagoon!
Sigh. Americans are so grand on some levels. They are kind and
generous. They work hard and are honest and true.
But a more gullible bunch of morons I’ve never met!
They actually thought that JFK was killed by that CIA patsy. They
believed in the Vietnam War! Well, it was different for me as I
watched my birthday revolving in that draft lottery drum in August
of 1971.
Americans believe that Saddam Hussein was behind 9/11. They
believe that they won WWII. (Sorry, Soviets defeated Germany. USA
did defeat Japan. But who won?)
Americans believe that USA involvement in WWI saved Europe and
was a good idea. (Nope).
Americans believe that they are the exceptional nation on Earth and
have the right to run the planet.
Americans believe that if we don’t kill Muslim terrorists on the other
side of the planet, then they’ll come over here and kill us.
Americans believe the bullshit government 9/11 story.
Americans believe that God is on their side.
Americans believe that the government is on their side.
Americans believe that the rules don’t apply to them. They can print
currency out of thin air forever. They can kill people forever. They
can bully people forever.
Americans believe that they are top dog and the other bitches better
stay in line.
And now I see American cowering in fear over a virus that isn’t
nearly as deadly as the annual influenza, or car accidents, or heart
attacks, or falling in the shower.
Assyrians, Babylonians, Egyptians, Chinese, Mayans, Aztecs,
Romans, Popes, Caliphs, English, Russians, well, you name the
empire; all believed the above.
Where are they?
Americans think they are brave, free, strong, and smart.
LOL!
Tim McGraw

One thought on “Americans”