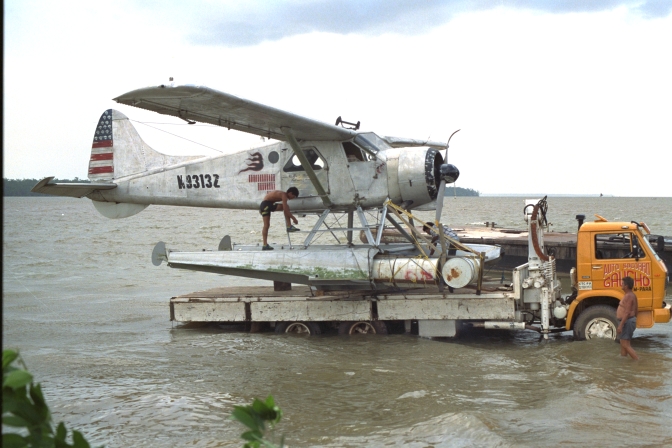 I’ve written this story before, but I can’t find it on the computer so I’ll write it again. Ha!

Back in the summer of 1990 I was hired on the phone by David Jones, a famous Hollywood stunt pilot and aerial coordinator, to work on the film “At Play in the Fields of the Lord.” I was to be the aircraft mechanic who would maintain the DHC-2 De Havilland Beaver used in the film and to convert the plane to floats when it was needed to ferry the actors and big shots to and from the movie set in the Amazon jungle outside of Belem, Brazil.

Belem, Brazil is an old city founded by the Portuguese (“Belem” means “Bethlehem” in Portuguese.)

The city sits at the end of one of the many tentacles of the Amazon in its delta. It is 200 miles or so south of the equator. Only 10% of the Amazon River flows by Belem, but the river is ten times bigger than the Mississippi even so.

David Jones was a real character. He was an ex-Marine helicopter pilot and had no fear. We’d drink together at the hotel bar and watch the time and temperature sign across Avenida Presidente Vargas and share old aviation stories.

Jones worked on “Apocalypse Now” and said it damn near killed him. It was the only job he quit. Jones filmed the famous Valkyries scene. The food was awful. He told me about the time that a quadratrack dragged in a dead water buffalo into the camp over the muddy track. It was going to feed them for days on the set.

In the film, the Beaver is on wheels, but to make extra money for his company; David Jones had me install floats on the plane and it would be used to ferry crew and actors to and from Belem to the movie set (the Mission location) every day. It was an hour boat ride or more down the tributary of the Amazon, but only 15 minutes by air.

So I put the floats on the plane in the open air hangar at the Belem International Airport. And with some trepidation we launched the plane into the Amazon at the old amphibious aircraft ramp owned by the Brazilian military. The plane was also removed from the Amazon at the same location after the crash.

When we launched the plane on floats, David Jones was long gone back to Los Angeles. He’d hired another ex-Marine named Chris to pilot the plane. We also had Manuele and Andrea along with us as the Italian/Brazilan support team. I flew co-pilot and reminded Chris to raise the water rudders and not over boost the engine’s manifold pressure with too much throttle.

We buzzed the Belem Hilton Hotel where the movie stars and crew were staying. (There were no rules in Belem at that time).

Then we flew up the tributary of the Amazon to find the Mission movie location. Chris was “thunder running”. The De Havilland Beaver has a 9 cylinder radial engine that sounds like a herd of Harley Davidson motorcycles let loose.

We flew at 30’ over the river under tree top level. The almost naked natives ran out of their huts onto their rickety piers over the river to wave and shout at us. It was like “African Queen” with a plane.

It was a memorable day for me.

The problem with flying in the Amazon River Delta is that almost every afternoon, due to the equatorial sun and high humidity (every day it was over 100F and 90% humidity.. the dysentery was relentless)… a huge thunderstorm would come into Belem from the Atlantic Ocean to the east. This huge deluge every day at 4 PM or so cleaned the city so that humans could survive there.

Once the plane was on floats Chris would fly and I’d be co-pilot and we’d go out to the Mission Location in the deep jungle with the stars of the movie and producer and director and at the end of the day, we’d fly them back to Belem.

But one day, the film office bumped me off of the plane’s list of passengers so that they could fit in one more actor or some big shot.

So, I worked out at the Belem Hilton and enjoyed my ONLY day off, besides Sundays, that I had on the six months I worked on the film. Then I went to the Tiki Hut Bar by the pool and drank beer starting about 3 PM

Sure enough, at 4 PM a HUGE storm came in from the Atlantic. I’d been there for five months and had not seen a storm this large and violent. It damn near took the Tiki Hut Bar out into the river.

I hoped, as I drank another Cerpinha Beer, that Chris had tied down the plane at the Mission Location and taken the boat back to Belem.

But he did not.

No, Chris took off from the Mission Location and headed downriver to the Yacht Club in Belem where we docked the Beaver to a buoy in the Amazon’s stream and ferried passengers to shore by boat. (Oh, it was fun to get out onto the float with the propeller turning two feet from my head as I perched on the float trying to snag that buoy.)

Chris headed downriver with a full load of actors and the producer, Saul Zaentz. Aidan Quinn was in the co-pilot seat. Kathy Bates, Daryl Hannah, Tom Berenger, and the Swedish kid and his governess were in the plane.

It soon was raining so hard that Chris couldn’t see fifty feet. He told me that he kept the shoreline off of his right wing tip and flew only 30 feet above the water. He told me that he flew UNDER the power lines that crossed the river. Now these power lines came from a hydro electric plant upriver and were the sole source of power to the million people living in Belem. (The population is now 2 million.)

When the tributary he was following ran into the main tributary of the Amazon flowing by Belem; Chris had to cross it blind. He had no shoreline to follow and this main tributary was almost a mile wide.

He dead headed across the river and had Aidan Quinn look out the window to the water below to give him his height above the water. It was still raining so hard Chris couldn’t see fifty feet ahead of him.

When Chris saw the first barge anchored in the river, he started to back off of the power while asking Aidan to call off the altitude. When Aidan said “Six feet”, Chris cut the power and landed on the river.

But then he saw another barge and hit the water rudders and dodged left. (There are no brakes on floatplanes.)

Then he saw another barge and dodged right.

Finally he saw a barge straight ahead on the shoreline that he couldn’t dodge. He told everyone in the plane to brace themselves.

The plane hit the barge at about 10 mph my guess. The front of the right hand float was torn off by the barge. The propeller was bent by the steel barge, and the plane sank nose first into 4 feet of water and mud below.

No one was hurt. The actors climbed out of the plane onto the barge. It was still raining like mad.

Meanwhile I’m back at the Tiki Hut Bar by the Belem Hilton pool and I get a bad feeling. The storm is really really bad. And sure enough, over the intercom, “Senor TEEM! Señor TEEM! Por Favor Blanca Telephonica” (Answer the white telephone.)

It’s the production office telling me that a car will be coming by the hotel immediately to take me to the Yacht Club to assess the damage to the plane. No one was hurt.

So I take the car to the Yacht Club in the pouring rain and see Brazilians in the river attaching 50 gallon drums to the right hand float to re float the plane while a Belemese in shorts stands on the horizontal stabilizer on the tail to lift the nose of the plane out of the water.

It all looked very clever to me. Someone asked me, “Is it safe for that guy to be standing on the tail like that?”

I went back to the hotel and thought about going home.

The production company asked for my passport the next day.

I was stuck there until I fixed the plane. Which took about 6 weeks. My good friend John Bentley came down from Seattle to help me and he eventually replaced me on the job.

Six months was enough for me.